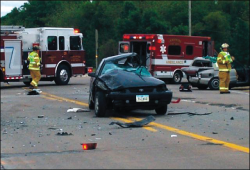 The Institute for Transportation (InTrans) at Iowa State University initially completed work on an in-depth study of crash history on low-volume, rural roads in Iowa in December 2010. Results indicated that unpaved roads with traffic volumes greater than 100 vehicles per day (vpd) exhibit significantly higher crash frequencies, rates, and densities than any other class of low-volume road examined, paved or unpaved.

The total mileage for this class of roadway in Iowa is only about 4,400 miles, spread over 99 counties in the state, so it’s certainly a manageable number of miles for individual rural agencies.

The purpose of this study was to identify and examine several unpaved, local road segments with higher than average crash frequencies, select and undertake potentially-beneficial mitigation, and evaluate the results as time allowed. A variety of low-cost options were considered, including engineering improvements, enhanced efforts by law enforcement, and educational initiatives.

Using input, active support, and participation from local agencies and state and Federal safety advocates, the study afforded a unique opportunity to examine useful tools for local rural agencies to utilize in addressing safety on this particular type of roadway.

The main goal of this research is to provide agencies with tools they can use in designing transition zones from high-speed rural roadways into to low-speed communities.

Dynamic speed feedback sign (DSFS) systems are one method to reduce vehicle speeds and, consequently, crashes on curves. These systems show promise but they have not been fully evaluated on curves. The Center for Transportation Research and Education at Iowa State University conducted a national demonstration project to evaluate the effectiveness of two different DSFSs in reducing speed and crashes on curves at 22 total sites on rural two-lane roadways in seven States. The goal is to provide traffic safety engineers and other professionals with additional tools to manage speeds and crashes on rural horizontal curves more effectively.

Data were collected before and at 1, 12, and 24 months after installation of the DSFS. On average, most sites had decreases in mean speeds, with decreases up to 10.9 miles per hour (mph) noted for both the point of curvature (PC) and center of curve (CC). Most sites experienced changes in 85th percentile speed of 3 mph or more at the PC, with the majority of sites having a decrease of 2 mph at the CC. The numbers of vehicles traveling 5, 10, 15, or 20 mph over the posted or advisory speed limit were also compared. Large reductions in the number of vehicles traveling over the posted or advisory speed occurred for all of the after periods at the PC and CC, indicating that the signs were effective in reducing high-end speeds, as well as average and 85th percentile speeds.

A before-and-after crash analysis was also conducted, and crash modification factors (CMF) were developed. CMFs ranged from 0.93 to 0.95 depending on the crash type and direction of the crash.

An integrated approach was taken to research work-zone safety issues and mobility, including input from many personnel, ranging from roadway designers to construction laborers and equipment operators. The research team analyzed crash data from Iowa work-zone incident reports and Occupational Safety and Health Administration data for the industry in conjunction with the results of personal interviews, a targeted work-zone ingress and egress survey, and a work-zone pilot project.

The objective of this research is to collect structural performance data (strains, accelerations, etc.) and environmental data (wind speed, direction, etc.) on the Saylorville Reservoir Bridge near Polk City, Iowa for the purpose of developing a self-contained/reporting safety information management system to alert bridge engineers, and more importantly, the public, of high wind events and direct/divert traffic to an alternate route should conditions for bridge passage be unsafe based on the collected data.

The objective of this project was to determine the effect of headlight configuration (daytime running lights, high beam, modulating) and rider color (bright yellow, blue denim, and black torso and helmet) on the conspicuity of a motorcycle to a driver of a passenger vehicle in a simulated environment. To achieve this, 36 participants completed three drives on a National Advanced Driving Simulator (NADS) 2 driving simulator.

During two of the drives, participants were presented with six oncoming motorcycles and three leading parked motorcycles, each with a different combination of rider color and headlight configuration. Each of the nine motorcycles was present in either the urban or rural driving environment.

Participants indicated when each motorcycle was first visible to them by pressing a button on the steering wheel of the driving simulator. The detection distances from the motorcycles to the participant vehicles were then recorded. Participants were within one of two groups: younger drivers (25 to 55) or older drivers (65 and older).

This research applied repeated measures analysis of variance to investigate the impact of headlight configurations and rider color on motorcycle conspicuity in urban and rural environments. The researchers found that oncoming motorcycles with modulating headlights were detected at the greatest distance compared to motorcycles with high beam or daytime running lights.


Motorcycle Conspicuity – What Factors Have the Greatest Impact


Motorcycle Conspicuity – What Factors Have the Greatest Impact

Red light running (RLR) is a problem in the US that has resulted in 165,000 injuries and 907 fatalities annually. In Iowa, RLR-related crashes make up 24.5 percent of all crashes and account for 31.7 percent of fatal and major injury crashes at signalized intersections.

RLR crashes are a safety concern due to the increased likelihood of injury compared to other types of crashes.

The research team developed this toolbox for practitioners to address RLR crashes. The Four Es—Engineering, Enforcement, Education, and Emergency Response—should be used together to address RLR problems.

However, this toolbox focuses on engineering, enforcement, and education solutions. The toolbox has two major parts:

The objective of this research was to investigate the application of integrated risk modeling to operations and maintenance activities, specifically moving operations, such as pavement testing, pavement marking, painting, snow removal, shoulder work, mowing, and so forth. The ultimate goal is to reduce the frequency and intensity of loss events (property damage, personal injury, and fatality) during operations and maintenance activities.

This report includes a literature review that identifies the current and common practices adopted by different state departments of transportation (DOTs) and other transportation agencies for safe and efficient highway operations and maintenance (O/M) activities. The final appendix to the report includes information for eight innovative O/M risk mitigation technologies/equipmentand covers the following for these technologies/equipment:

The objective of this project was to promote and facilitate analysis and evaluation of the impacts of road construction activities in Smart Work Zone Deployment Initiative (SWZDI) states.

The two primary objectives of this project were to assess urban freeway work-zone impacts through use of remote monitoring devices, such as radar-based traffic sensors, traffic cameras, and traffic signal loop detectors, and evaluate the effectiveness of using these devices for such a purpose. Two high-volume suburban freeway work zones, located on Interstate 35/80 (I-35/I-80) through the Des Moines, Iowa metropolitan area, were evaluated at the request of the Iowa Department of Transportation (DOT).