Yes, it is a pocket! But it’s not exactly the size of your back pocket, it’s actually much bigger. Take a look (see Figure 1)! The photo shows a pocket in a bridge footing. See that square hole in the middle? That’s what we’re going to be talking about. This one is a test model. The hole is 2 feet by 2 feet. In a real bridge it could be 5 feet by 5 feet (or even larger). Now, that’s a huge pocket! It’s that huge because a bridge column that is 4.5 feet by 4.5 feet has to fit in it. 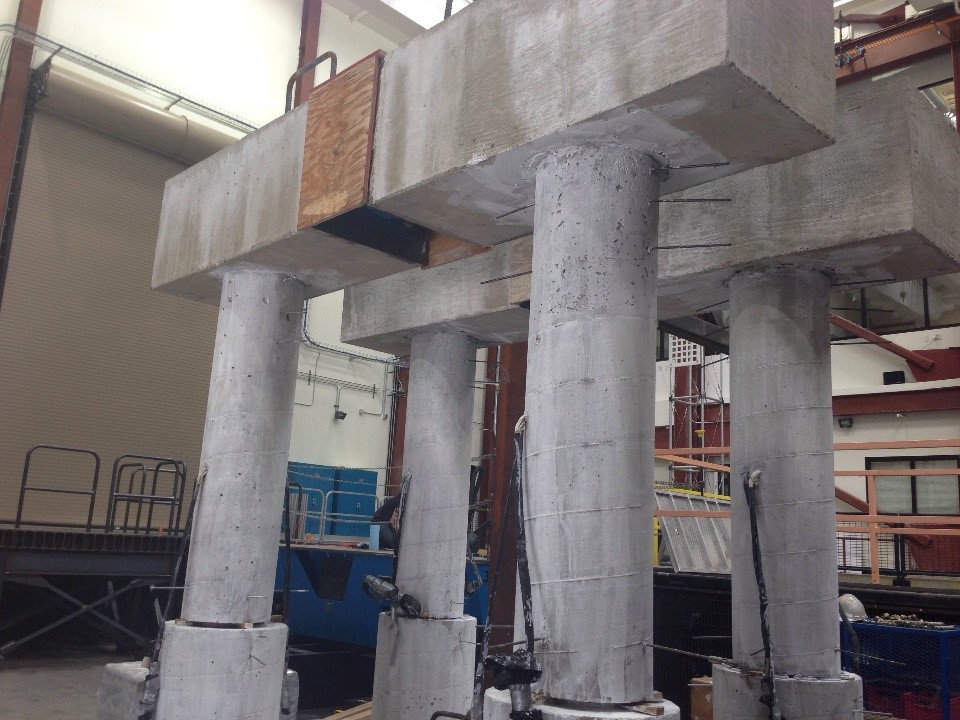 Now the column must be lowered into the pocket (see Figure 2). Unlike the money you put into your pocket and that disappears as soon as you see something you like, what goes into this pocket stays for good! In fact, it is permanently glued to the footing.

How? Well, see Figure 3. Bridge builders pour a fluid grout made of cement, sand, and steel fibers into the bottom of the bridge footing, and then the column is lowered into the pocket. The particular type of grout used here is known as “ultra-high performance concrete,” because it is five times stronger than regular concrete and doesn’t crack easily.

Once in the right position, the gap between the column and the pocket is then filled with grout too (see Figure 4). But what does the finished product look like? See Figure 5.

But why go through all this trouble? Well, this way pieces of the bridge can be built simultaneously and then assembled later rather than building them in sequence. Still, you might ask why the bridge pieces can’t just be built together at the construction site. The answer to this question is the whole point! It takes a long time to build bridges on site, in fact, it can actually take many, many months. First the footings need to be built, then builders must wait for the concrete to be strong enough to then build the columns. After that the columns need to be strong enough before the rest of the bridge can be built. And if the bridge is on a new road, that road cannot be opened to traffic. If the bridge in on an existing road, there will be long traffic delays. Long construction time also means many weeks of traffic control, which can cost a lot of money and there is a higher chance of construction zone accidents for the cars and the construction workers.

How do the pockets help? They allow the attachment of prefabricated footings and columns. The key word here is “prefabrication.” Through prefabrication different pieces of the bridge, including the beams and decks, can be built in an off-site facility simultaneously. This could save lots of time. The pieces are then shipped to the bridge site and quickly assembled. This is what we call “accelerated bridge construction” or ABC. Building bridge pieces in an off-site factory, or facility, has other advantages too. This way, bridge builders have much better control over the precision of construction and the quality of the materials used. Parts can also be mass produced to save time and labor.

At the Accelerated Bridge Construction-University Transportation Center at the University of Nevada, Reno, researchers conduct a lot of studies to make sure these connections are strong enough and can withstand earthquakes.

Ultimately, the main point of ABC is to build bridges faster! That way everyone can have access to bridges more quickly and do not have to spend precious time being stuck in traffic.