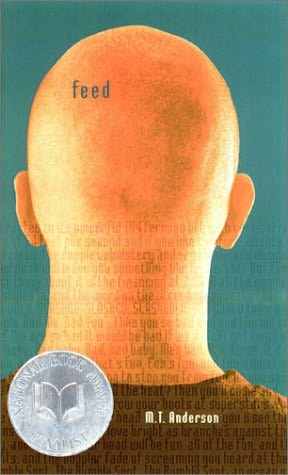 M.T. Anderson’s novel Feed, published in 2004 by Candlewick Press, follows a group of teenagers living in the technologically advanced but not-so-distant future. Titus and his friends are not so different from high school students today”¦except that they are constantly fed information through transmitters implanted directly in their brains, and they vacation on the Moon and Mars.

Space travel might sound pretty great, but it turns out the moon isn’t so awesome. Titus says, “We went to the moon to have fun, but the moon turned out to completely suck.” Even though there are tons of restaurants, hotels, and clubs on the moon, “there’s just the rockiness, and the suckiness, and the craters.”

Then there’s the feed. The feed “knows everything you want and hope for, sometimes before you even know what those things are. It can tell you how to get them, and help you make buying decisions that are hard.”?

Besides instant advertising, the feed also allows you to telepathically communicate with those around you. Sounds pretty awesome, right?

But Titus is growing tired of the nonstop advertising and information transmitted into his brain via the feed. When he meets Violet, a girl who decides to fight the feed, his whole world changes as they struggle against unseen, watchful forces.

At first this book seemed a little weird and out-there. I mean, really, an instant stream of information straight into your head? Spending spring break on the moon? But the more I read, the more it started to seem like an exaggerated, futuristic version of our world.

With all the information out there, it gets hard to sort through it all and to know what we really want, and sometimes it feels like we don’t have control. M.T. Anderson’s Feed explores what it’s like to be young in the age when information is instant, and everywhere you turn, someone is trying to sell you something.

Feed is a slightly strange but compelling story of a teenager trying to make his way through high school, find meaningful relationships, and sort out his own thoughts from a jumbled mass of information. Sound familiar?