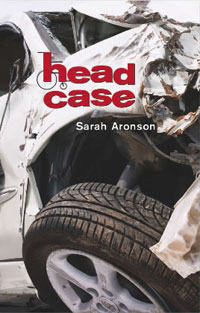 What would life be like if you couldn’t walk, or feed yourself, or clean up after yourself? Head Case, a novel for teens by Sarah Aronson, gives a hard-nosed glimpse of such a life.

Frank Marder, the 17 year old narrator, tells readers from the get-go what they’re in for: “Two people are dead. I have to spend the rest of my life in a wheelchair, paralyzed from the neck down. . . .One mistake. One bad night. One too many drinks. You think you know the rules. Just say no. Wear a helmet when you ride a bike. Buckle up. Study hard. Don’t let your friends drive drunk. Now look at me.”

And this is just from the first page. Whew! I have to admit that I almost put this book down. I wasn’t sure I wanted to read about Frank’s life after the accident. What kind of life could the guy have now? As Frank says: “I’m a head. That’s it.” Ye gods.

But I wanted to know how would he adapt? At first, reading this novel it felt a little bit like gawking at a traffic accident. Or like watching one of those films they show in driver’s ed to try and scare impressionable young drivers out of ever drinking and driving. But I was quickly captivated by Aronson’s thoughtful portrayal of Frank. Frank tells it like it is. He points out that if he had died, his family could grieve and move on. Now his mother will have to take care of him and see him naked every day.

The story begins on the day he’s discharged from rehab. Although he’s learned how to use his wheelchair, he and his parents have to learn to live together again under these drastically new rules. Frank is in his chair in the living room, listening to his mom, when suddenly, “Sweat and whiskey are in the room, and my chair starts rolling even though the motor is disengaged.” The reader is as disoriented as Frank by the sudden interruption. Frank’s dad has walked up behind him and pushed the wheelchair without asking first. It’s these carefully observed details of daily life that make this quiet story compelling.

Frank wishes and hopes that some miracle cure would be found for people like him with totally severed spinal cords, but he has no illusions about a cure. Nor is he sure that he deserves one. He drove drunk and killed two people, a fact he has to live with for the rest of his life.

Head Case is a powerful exploration of a young man’s struggle to find meaning in his new and vastly changed existence.