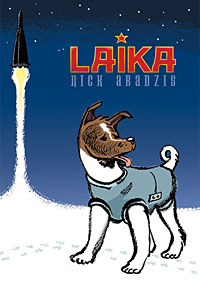 On October 4, 1957, the Soviet Union shocked the world by being the first country to successfully launch an artificial satellite into space. Sputnik I was a terrific coup for the Soviets. Soviet Premier Nikita Krushchev wanted to follow up immediately with another success. It had to be different somehow from Sputnik I, and he wanted it done in just over a month, in time to celebrate the 40th anniversary of the October Revolution on November 7 (by the western calendar).

Laika by Nick Abadzis is a full-color graphic novel that weaves historical fact with imaginative fiction to tell the story of the first dog in space.

The novel begins somewhere in the far north of the Soviet Union, outside a gulag, one of the camps for political prisoners. A man has just been released and is trudging through the snow, telling himself over and over, “I am a man of destiny . . . I will not die.”

Fast forward 18 years and this same man is now the chief designer of rockets with the idea to send an animal up in Sputnik II. In Chapter 2, readers meet the puppy that will grow up to be the first dog in space. The puppy is a cute little brown and white dog with a curled up tail.

Abadzis, who is both author and artist, portrays the dog as patient and tough, surviving on the streets. He even shows her dreams, hinting at her future flight. Then she’s caught in a dog catcher’s net and sent to the Institue of Aviation Medicine. There the dog is cared for by Yelena, a young woman who takes cares of all the dogs being trained and tested. She doesn’t know what sort of training is going on exactly. Everything is secret. But she knows that sometimes the dogs don’t return from the tests. Although Yelena’s not supposed to become emotionally attached to her charges, she can’t resist Kudryavka, Little Curly.

Abadzis’s use of muted colors and heavy lines help convey the emotion of this story. Although the loose, hand-drawn style was less successful for portraying the adult male characters (I kept mixing them up), it worked really well for creating the most compelling character, the dog, who became known as Laika.

To learn more about the real Laika as well as this historical graphic novel, visit Nick Abadzis’s website.