A glimpse at the past 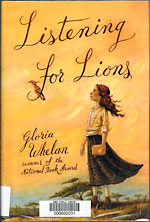 Listening for Lions by Gloria Whelan starts in Africa in 1919. Here 13 year old Rachel Sheridan is happy helping her missionary parents in their hospital. She’s never lived anywhere else, and she’s never wanted to. Then the influenza epidemic of 1919 hits and changes everything. Now Rachel is an orphan and will have to leave Africa and go live in a cold and lonely English orphanage. Rachel’s resigned to leaving her beloved Africa, but her greedy, conniving neighbors have different plans. They convince her to go to England pretending to be their daughter. It would fufill the dying grandfather’s wish, they tell her. What can she do? She doesn’t want to hurt the grandfather, and she wouldn’t mind delaying going to the orphanage either. So she agrees, and her adventure begins!

“The day we landed in Southampton, I saw my first snow. It was as if the snow had finally come down from Mount Kenya and was swirling all around us. I could not think what I was doing is so frigid a country.” What does it mean to leave a place you love? Can you ever feel like home anywhere else? Whelan has written an exciting story reminiscent of the classic The Secret Garden by Frances Hodgson Burnett.

A glimpse at the future 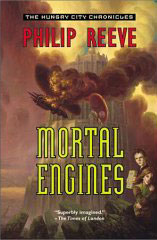 “It was a dark, blustery afternoon in spring, and the city of London was chasing a small mining town across the dried-out bed of the old North Sea.”

So begins Philip Reeve’s first novel in his Hungry City Chronicles. Thousands of years in the future, much of the Earth is a barren rock, and cities have become hungry and mobile. They crisscross the planet on gigantic, tank-like treads, eating each other. London is one of the big cities, gobbling up smaller ones. Here 15 year old Tom, a lifelong resident of London, is proud of his city. He feels a little sorry for the small towns that get swallowed, but he chalks it up to “Municipal Darwinism.” Tom’s views begin to change after he saves his idol from a knife attack and is soon after pushed off the tracked city and left in the desolate outland. Will he make it back to London? And what exactly is the old technology that London’s Lord Mayor and his guild of engineers is putting back together that will make London the ruler of all cities? 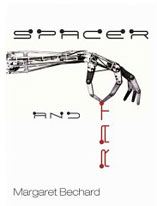 Jack is a spacer. He lives and works on a space station, a station that’s built inside a hollowed out asteroid. Kit is a rat, a girl from Earth who’s on the station illegally and trying to stay hidden until she can find a ride. Jack has no patience for the dumb Earthies. But when Kit walks into the pub where Jack works, he reluctantly lets her barter with him for food. Against his better judgement, he’s intrigued. Why does she need to go to Seattle Prime? One of the many fun parts of this adventure novel is the names of the ships docking at Freedom Station: the Bradbury, the Niven, the LeGuin. Science fiction fans will recognize those names. And a major piece of the action takes place on a zip scooter in space. Who wouldn’t want to ride one of those? Or at least read about it?