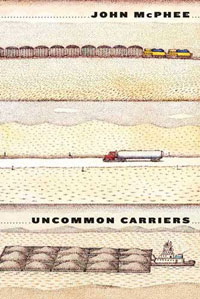 So what’s it really like to drive a semi-truck, or a coal train, or a river barge?

John McPhee, author of 27 books and staff writer at The New Yorker magazine, went to find out. He listened and observed from the passenger seat of a 65 foot chemical tanker truck, riding from Bankhead, Georgia, to Tacoma, Washington, with owner-operator Don Ainsworth.

Despite McPhee’s plain clothes, he still noticed plenty of “puzzled glances” in truck stops. “So, a little desperate and surprisingly inspired, I bought a cap,” McPhee wrote. “The glances died like flies.”

McPhee’s dry humor is frequently aimed at himself: “I was offered admission to the New Jersey Driver Improvement Program, on the following voluntary basis: enroll or lose your license.”

McPhee portrays the people with whom he traveled in compelling detail, with an ear for lively quotes. He writes, “Ainsworth thinks his chemical tanker is at least as attractive as anything that could pass it in a car.” Ainsworth takes excellent care of his truck. After he paid $60 for a thorough truck wash, he says, “This is as close as a man will ever know what it feels like to be a really gorgeous woman. People giving us looks, going thumbs up, et cetera.”

McPhee starts and ends the book with chapters about Ainsworth, each recounting a different trip. The chapters in between cover McPhee’s experiences with other uncommon carriers, like attending a ship handling school in the French Alps, piloting a barge up the narrow Illinois River, and riding a coal train.

In “Out in the Sort,” McPhee describes the hubbub of activity at the UPS sorting facility at the Louisville International Airport in Kentucky. His story begins with live lobsters and the business of shipping them around the world. Which leads him to the vast UPS hub and its four million square feet of floor space under one roof. “The lobsters go by moose [UPS step truck] to the UPS hub as living passengers e-ticketed on the eleventh-largest airline in the world,” McPhee writes.

Once they arrive at the hub, the “living lobster, checked in, goes off on a wild uphill and downhill looping circuitous ride and in eight or ten minutes comes out at the right plane.” If only human air travel were so easy. When you’re ready to explore vicariously some weird, little-known vehicles and carriers, McPhee makes an excellent guide.