This month we’re talking about transportation that takes place at the breaking point—in the heart of the storm, in severe weather conditions across the country—and what better example than transportation in tornado alley?

In the United States, Texas has the most tornadoes per year, followed by Kansas, Oklahoma, Florida, Nebraska, Illinois, Colorado, Iowa, Alabama, Missouri, and Mississippi (in that order). 1 In 2015 alone, Texas recorded 244 tornadoes, the highest number of twisters to touch down there since 1950! 2

So, how do these states handle transportation during a tornado watch or warning? What other kinds of transportation can be found in tornado alley? In this article, we’ll be exploring all things transportation when it comes to tornadoes!

Perhaps the most thrilling form of “transportation-meets-tornado” is a storm-chaser vehicle.

A person who chases storms is known as a storm chaser or “chaser.” In general, storm chasing is defined as “the pursuit of any severe weather condition, regardless of motive,” whether it be out of curiosity, for scientific investigation, or simply for the thrill of the chase. 3

As you might imagine, driving into the heart of the storm requires an entirely different mode of transportation; with regular vehicles, it simply isn’t safe. Though there’s no rule of thumb about exactly what kind of vehicle you need when storm chasing, there are a few famous designs from the last decade or so used to capture what a tornado looks like up close.

Casey started his storm chasing career the same as anyone else; he used to rent vans and drive as close to the tornado as possible while staying a reasonable distance away. At some point, Casey decided he wanted to make his own documentary on storm chasing/tornadoes and decided he needed to craft his own storm-chasing vehicle. Specifically, Casey wanted to be able to film from inside the tornado! 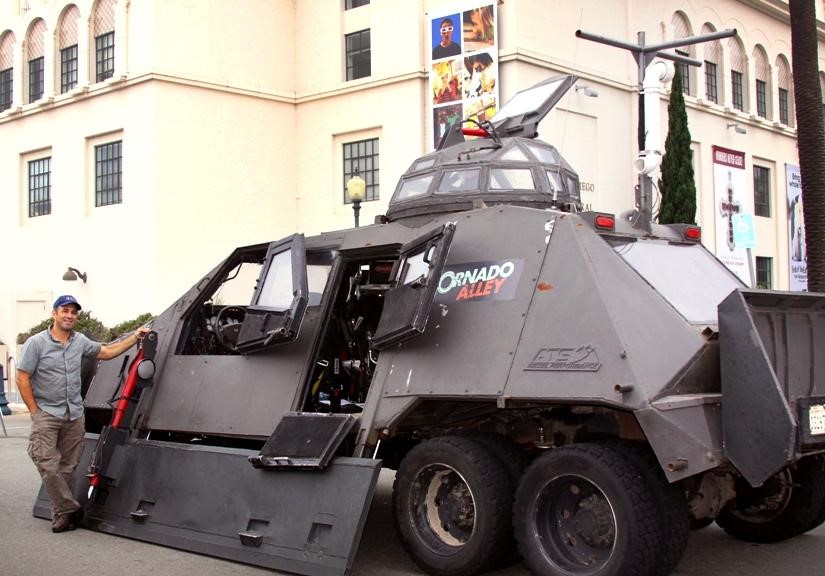 That’s when he created the TIV. He began by ripping apart the body of a Ford truck, then, he equipped the vehicle with 8,000 pounds of armor plating, polycarbonate bulletproof glass, and a state-of-the-art IMAX camera. Casey’s TIV, which he designed himself, cost over $80,000 to construct.

With the TIV, Casey succeeded in his mission: to film from the eye of the storm. Casey’s TIV was also featured on Discovery Channel’s Storm Chasers, as well as his second model TIV 2.

The TIV 2 was also featured on Mythbusters alongside the SRV Dominator vehicle (another storm chaser vehicle) to “determine their endurance to storm force winds.”

What you need to know

Alas, most of us are not storm chasers, so there are things you should keep in mind when driving during a tornado watch or warning, especially if a tornado has been spotted or has touched down in the area you’re driving in.

A tornado’s strong winds are capable of picking up debris, even moving it miles from where it was lifted from. If the winds are strong enough, your car is no exception to a tornado’s wrath. Cars can be blown over and picked up by a tornado, so it’s important to know what to do if you ever get stuck in a tough spot. 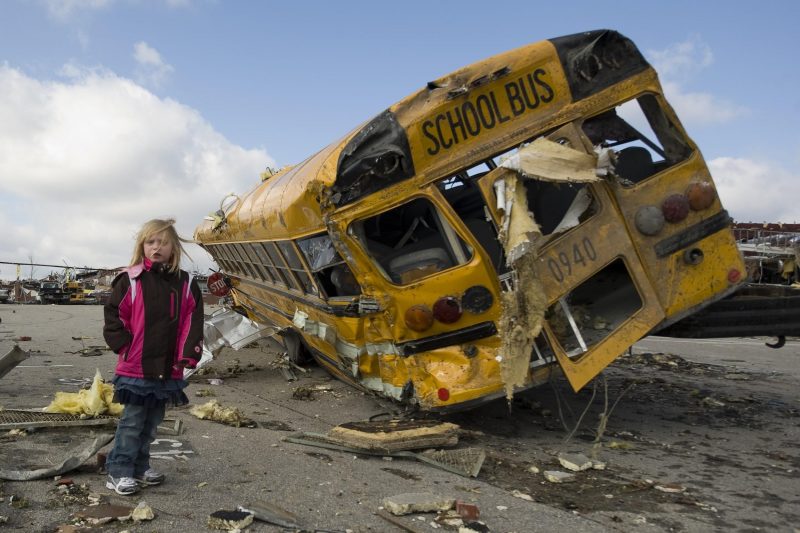 AccuWeather has a list of things to keep in mind if you get caught in your car during a tornado. First and foremost, you shouldn’t try to outrun it. AccuWeather says the best plan of action, if you see a tornado develop where you’re driving, is to pull over and evacuate the vehicle. Most importantly, do not hide in your car.

You shouldn’t hide under your car, either, since a tornado could potentially roll or lift your car from its position. Ideally, you should seek the nearest sturdy building or storm shelter. If there isn’t shelter nearby, however, AccuWeather says to find the nearest ditch or low-lying area and to “crouch low to the ground covering your head with your arms.”

But what about underpasses? Though they may seem like a good place to hide, it’s a myth, says AccuWeather meteorologists, due to the fact that they’re above ground. They say that winds from a tornado can accelerate while passing through an underpass and could potentially blow your vehicle away, or worse, potentially causing the underpass to collapse.

When it comes to driving in an area with a tornado, transportation can go one way or the other; Either you’re doing your best to evacuate your vehicle and get to safety or you’re gearing up with your vehicle to drive to the heart of the storm.

Again, most of us are not storm chasers and it’s probably best to stay as far away from a tornado as possible when you’re on the road. That said, if you can’t avoid a tornado, it’s best to abandon your vehicle altogether and seek substantial shelter. Unless you’re a thrill-seeking filmmaker, when it comes to mixing transportation and tornadoes, just don’t!