Volcanoes, mountains, and a vast array of species. These things not only exist on land, but also within oceans, which cover 70 percent of the Earth.

Thanks to exploration, we now know there is a mid-ocean ridge, which covers 23 percent of the Earth’s surface and consists of various mountain ranges. It was not until the 1950s that the researchers from the United States discovered these mountain ranges, which laid the groundwork for understanding the phenomenon of plate tectonics.***

So why have we only explored five percent of the ocean? Well, the pressure in the deep sea is so strong that to explore it you must go in a capsule more than a foot thick made of steel.

One of the technologies used to understand the ocean floors is the use of satellites from space. These satellites can take pictures to capture the shape of the Earth’s floor. You might be asking yourself, “So what?” Well, where there are mountainous regions in the ocean, there are also clusters of wildlife. You can imagine that this type of map would be very useful to wildlife researchers and fishermen.

One of the most famous technologies is the Deepsea Challenger, which was designed by James Cameron and a team of collaborators from the United States and Australia. 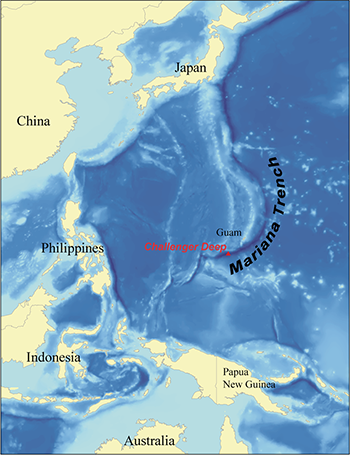 Cameron, the director of Titanic and Avatar, has been interested in deep sea exploration since he was young. So after seven years, the Deepsea Challenger was created.

In 2012, James Cameron was the fourth person to reach the deepest part of the entire ocean: the Mariana Trench’s Challenger Deep. This trench is about 1,580 miles long and 6.8 miles deep. A trench was created in the aftermath of plate tectonics. In total, Cameron spent 12 hours in voyage in the Mariana Trench. Cameron reported that as he plunged into the deep sea, he went from being extremely warm at the surface (Papua New Guinea is near the equator), to freezing temperatures at the bottom. The Challenger travels at a speed of 500-700 feet per minute! That means the voyager travelled at a speed of about one mile every ten minutes.

About seven miles from sea level at the sea floor, Cameron reportedly found microorganisms that may have been like those that led to the development of life on Earth 3.8 billion years ago. So far the expedition has turned up 68 new species never seen before!

At the sea floor, Cameron’s Deepsea Challenger must protect him from 16,000 lbs of pressure per square inch, which is 1,000 times the pressure at sea level. Inside the Challenger, Cameron had computer controls and a window to see what was all around him. Cameron now visits different schools to promote ocean exploration, and hopes children and teens will pursue exploration in their future careers.

The ocean covers 70 percent of the Earth. Oceans also control our environment and are responsible for fostering life on Earth beginning 3.8 billion years ago.

So why have we only explored five percent of this major resource? No one really knows, but there is always hope the passion to explore the ocean will be renewed. Why explore the oceans? One reason is that we are rapidly fishing and mining the oceans without understanding the consequences.

By exploring the oceans, we can become more knowledgeable about the life systems in the ocean and do more to conserve its’ resources. After all, what if the cure to cancer is waiting to be explored in the ocean? One of the first medicines for HIV, called AZT, was derived from a Caribbean reef sponge, which is currently an endangered species. It would be quite disappointing if we deteriorated the oceans’ resources without knowing anything about their potential to cure human diseases or even serve as the next renewable fuel source.

***Plate Tectonics is the theory that our Earth is made up of several plates, which have moved throughout Earth’s history. Where plates run together or pull a part is where we have mountains, earthquakes, and volcanoes. See the map to the right to see the different tectonic plates.