Steampunk transportation: A pirate’s life for me

Airships are a hallmark to any Steampunk fantasy and they’re specifically helpful to the lifestyle of a Steampunk air pirate. These airships are power-driven aircraft’s that float in the sky using a lighter-than-air substance like helium or hydrogen.

The history of air pirates

Although Steampunk relies on fiction and fantasy, some elements of any Steampunk storyline borrow from our own timeline of history.

Steampunk piracy resembles the pirate “look” from the late 1500s through mid-1700s, because the “Golden Age” of piracy, in our history, lasted from about 1650 to 1730, when pirates such as Henry Morgan, Captain Kidd, and Blackbeard sailed the seas.

Privateering (the act of government-sponsored piracy) dates back to at least the 13th century and was defined sometime in the mid-1600s. In our own history, privateering came to an end during the Victorian era (which marked Queen Victoria’s reign in Britain from 1837 to 1901).

Steampunk pirates are styled the same as the sea pirates we’re familiar with, whose outfits come from the 16th, 17th, and 18th centuries, but that’s not to say that pirates weren’t alive and well in the 19th century. Some even argue that all pirate storylines are more fiction than fact, since the age of pirates is heavily romanticized in European culture.1

The idea of the Steampunk pirate has captivated authors for years.

If you’re interested in the world of airship pirates, you might check out any of these Steampunk novels: Agatha H and the Airship City by Phil and Kaja Foglio (2011); Retribution Falls by Chris Wooding (2009); or The Iron Duke by Meljean Brook (2012), as found on a list of the “23 Best Steampunk Books.” 2

Another popular Steampunk vessel is the dirigible—a balloon-like airship like the one imagined in James P. Blaylock’s 1986 novel Homunculus. In our own history, the first engine-powered dirigible was invented during the Victorian era, in 1852, by Henri Giffard and was called the “Giffard Dirigible.”

Many Steampunk narratives take place in literature or film but can be enacted and celebrated in modern-day lifestyles and events.

The best modern-day representation of the airship pirate is probably the Burning Man festival, which is held annually in the Black Rock Desert in Nevada.

The event is described as “an experiment in community and art, influenced by 10 main principles, including ‘radical inclusion, self-reliance, and self-expression.’” The event dates back to 1986 and still takes place each year during the end of August and the beginning of September, leading up to the U.S. Labor Day holiday.

So how does Burning Man tie into Pirate Steampunk? Many Burning Man festival-goers are “Steampunks” themselves, and they use the opportunity for self-expression to manifest the past into the present. Another main element of Burning Man is the use of art cars. Art cars are cars that have been painted, decorated, and altered to look like something fantastical.

Many festival-goers choose to borrow their Burning Man aesthetic from the Pirate Steampunk narrative by creating art cars that resemble pirate airships. And their imagination doesn’t end there; many Burning Man goers (often called “Burners”), create their outfits, accessories, and even their persona during the festival based on the persona of a Steampunk pirate.

Did you know there is Steampunk music, too? That’s right: Pirate Steampunk has manifested itself into the world of music.

The band Abney Park mixes elements of industrial dance, world music, and Steampunk-influenced lyrics to create Steampunk-inspired music. The band, based in Seattle, Washington, gets their name from the Abney Park Cemetery in London, England. 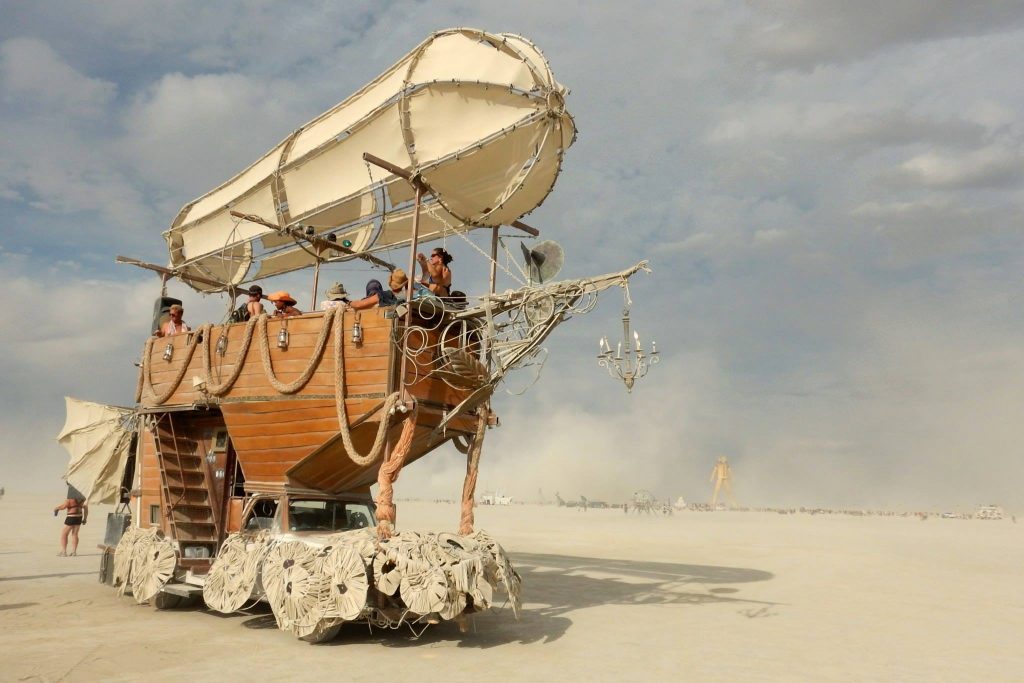 The group’s Steampunk-inspired lyrics may be represented best in their song “Steampunk Revolution,” which was released in 2012 with the rest of their Ancient World album: “We’ve got a Steampunk revolution. We’re tired of all your so-called evolution. We’ve dated back to 1886. Don’t ask us why, that’s how we get our kicks.”

So what do you think, is a pirate’s life for you?

Without a time machine, it’s hard to imagine what the Golden Age of pirates may have been like, but with the help of Burners, music artists, and writers, we can collectively paint an idea of what the pirate life may have been like (at least through interpretation).

History is often distorted, and it’s hard to verify the accuracy of Steampunk culture, but a couple of things are true for sure. First, Steampunks know how to appreciate the past. Whether it’s an accurate representation or a playful representation, these Steampunks understand the value of the past.

Second, the era of pirates is largely romanticized, so it’s hard to say exactly how “a pirate’s life” may have been. That said, Steampunk culture gives us a good idea, time and time again, of how the world may have been had our modern technology never existed.