Steampunk transportation: The Victorian era and the Steampunk craze

Are you in the loop about Steampunk?

Steampunk may be defined as “where history and fantasy collide with technology.”1

More specifically, Steampunk is a subgenre of science fiction that typically features steam-powered machinery rather than advanced technology. Most Steampunk culture bases its aesthetic and narrative on machinery from the 19th century.

There are many different “veins” of Steampunk culture that have been written about, sampled in film, or enacted and imagined in modern-day fandom culture. These sub-genres include Pirate, Victorian, American West, Dystopian, and many others.

The history of Steampunk

So where does “Steampunk” come from?

The origin of Steampunk is debatable; it’s difficult to know exactly where the first Steampunk authors drew their inspiration from, but a couple of things are known fact.

First, Steampunk inspiration comes from the Victorian Age, from 1837 to 1901. The movement “reaches directly into the pocket of Victorian England and predicts what the world would be like today had its inhabitants and inventors prevailed over modern technology.”2

Second, before it was a full-flown sub-culture phenomenon, Steampunk started as a sub-genre of science fiction in the 1970s, and its inspiration takes from 19th century Victorian writers. These writers include Jules Verne, author of Twenty Thousand Leagues Under the Sea, and H.G. Wells who wrote The Time Machine.

These classic science-fiction novels play a big role in Steampunk culture and literature, but it’s important to note that Victorian-age novels were not Steampunk in itself but rather a large source of inspiration for the Steampunk movement that was to come a century later. The author of Steampunk Prime, Mike Ashley, says that Steampunk is “the idea that perhaps the Victorians got it right and that we do live in a world of airships.”

When traveling in a Steampunk world, you should anticipate significant differences from our own ways of traveling.

The first steam-powered locomotives originated in Great Britain at the dawn of the 19th Century. These locomotives get their fuel by burning combustible materials like coal, wood, and oil to produce steam. The steam moves different parts of machinery that work in rhythm to move the train forward.

The first “cars” were steam-powered, too. The first steam-powered automobile designed for roads was built in 1801 by Richard Trevithick. The world’s first practical automobile to run on gasoline wouldn’t come along until 1885, toward the end of the Victorian era, when Karl Benz introduced his gasoline-fueled car.

These steam-powered cars and trains manifest themselves in the Steampunk world. These Steampunk steam-powered “cars” include Gurney carriages—like the ones in our own world—or they can be something entirely strange and implausible. 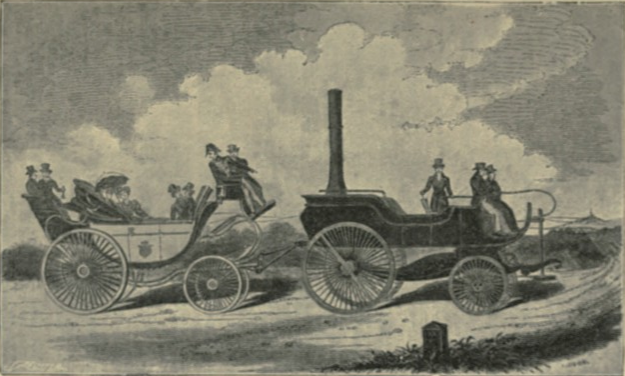 Some Steampunk contraptions never got the spotlight in our timeline of history, but Steampunk culture gives them the center stage. The best example of this is probably the hallmark of steampunk transportation: the airship. We’ll talk more about the airship’s role in Steampunk in our next article, along with other Steampunk classics.

You should know that not all Steampunk transportation uses steam power. Horse-drawn cabs maintain their place in urban life for many steampunk cities. The Steampunk world also showcases ornithopters—another mode of transportation that never “made it” in modern history.

Ornithopters are, in theory, flying machines with flapping wings (like a bird). These “machines” could be as simple as winged arm attachments but—in our own timeline—would never “take off” as a practical flying invention.

The world of Steampunk punks

So what do you think, would you be down to get around in a Steampunk world?

Since the birth of the Steampunk narrative, the stories have manifested into a phenomenal counter culture!

So, could you be a Steampunk? That depends: How do you feel about the Victorian era and the Steampunk craze? If you find yourself interested in alternate timelines—where steam power rules the world—then consider Steampunk literature, film, or festivals!

And if Victorian-heavy Steampunk isn’t quite your style, then maybe it’s a pirate’s life for you! In our next article, we’ll talk Pirate Steampunk and ways it’s manifested and reimagined in our culture today. We’ll also talk about the hallmark of Steampunk travel: the airship.

Are you ready to take off? But wait! To ride in style in a Steampunk world, make sure to grab your monocle, a top hat, and any other Victorian era gear that suits your fancy; Steampunk is all about appreciating the past. Let’s go!