One pleasant February night, three young joy riders uprooted or stole about 19 signs on rural roads in Florida. Hours later, on one of those roads, three other teenagers drove into an intersection in front of a truck; all three were killed. The vandalized stop sign that should have warned them to stop was lying on the roadside nearby. Three kids dead. Three people convicted of manslaughter and sentenced to prison. Six lives destroyed.

An epidemic of thoughtless “fun”

Unfortunately, the Florida story is not an isolated case. Not every state keeps records of injuries and deaths directly due to sign vandalism. In seven states that do, however, an average of two deaths a year have been attributed to vandalized or stolen signs. And there are other costs, not as heartbreaking as lives needlessly lost, but significant just the same. It is estimated that every year $50 million is spent on medical and vehicular repair-related expenses because of crashes caused by the removal of traffic signs. Another estimate is that 30 to 40 percent of replacement signs purchases are necessitated by sign vandalism and theft. The costs rack up quickly. Taxpayers in the United States pay more than $50 million dollars annually to repair or replace vandalized signs, according to the U.S. Department of Transportation. The unfortunate reality is that purposeful damage and theft of traffic signs is on the rise.

Why vandalism is a serious problem

When signs are missing or defaced, motorists don’t have critical information they need to make safe driving decisions. Vandalism of stop or yield signs, in particular, increases the likelihood of a serious, sometimes fatal, collision. So, activity that vandals may consider to be only a harmless prank or a “trophy hunt” could cost someone else his life.

Some of the most common kinds of vandalism are painting or plastering something, like stickers or posters, over the sign. While it might be seen as harmless, abnormal looking signs can confuse drivers, or cause delayed reaction which can result in death or injury. Alterations can also be a serious issue. People can change information, such as speed limits, on signs. Such alterations are especially dangerous for people unfamiliar with an area. 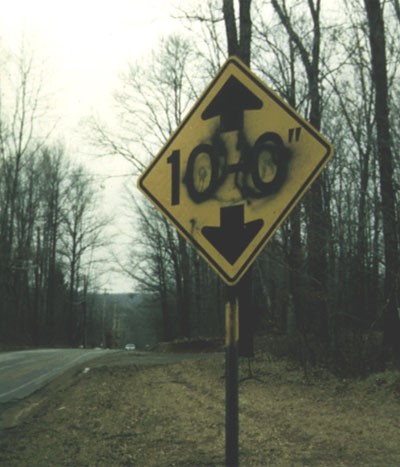 Other people shoot signs to show defiance for the government or authority. Sometimes people thoughtlessly use signs for target practice. Or break signs down or tear them out to avoid following the law (“if it isn’t there, you don’t have to do it” mentality).

Theft is the other major issue. Besides the obvious effect of causing crashes, missing signs can make it difficult for emergency responders to locate streets, even with the aid of GPS. The most commonly stolen signs tend to be street signs named after family, friends, significant others, and famous people and places and signs that are perceived as references, such as High Street signs (for the association with marijuana). Some streets, like Abby Road and Blue Jay Way, both famous among Beatles fans, have been stolen so often that cities have found other ways to demarcate them. For example, Abby Road signs are posted on buildings, too high for people to reach without a ladder, or simply painted on the curb.

The mistaken idea persists that sign vandalism is just for laughs. A Google search for information for this article, for example, turned up several related search categories: “funny pictures sign vandalism,” “funny sign vandalism videos,” “funny vandalized signs,” and others. Note: “funny” was not one of the search terms.