Transportation Feats of the World: Journey on the London Underground

Across developing countries in the West, railway travel really picked up speed toward the end of the 19th century. Traditional railway travel was monumental enough—people worried the speed of steam power locomotives would be detrimental to passengers’ health. Now imagine living in that time period and hearing they were planning to build a railway underground. It was unheard of, and many people were sure it would end in disaster.

So, for our next stop along Go! Magazine’s tour of the Seven Great Transportation Feats of the World, we’re heading to London, England, to ride the London Underground—the world’s first underground railway line. Also referred to as simply “the Underground,” or by its nickname “the Tube,” the London Underground is a famous public transportation system. It’s often ranked alongside other famous attractions like the Buckingham Palace, “Big Ben,” or Westminster Abbey.

History of the London Underground

Today, the London Underground is composed of 11 different train lines connecting all around the city, and some parts of other countries in the United Kingdom, including Buckinghamshire, Essex, and Hertfordshire. But the Underground started off as something much smaller when it was first established over 150 years ago.

The first tube line was built by a private company called Metropolitan Railway. The first trip was on a chilly January in 1863 and carried 38,000 passengers. The line ran between what now connects Paddington and Farringdon. It used gas-lit wooden carriages hauled by steam locomotives. It was considered a success and the line was soon extended from both ends. By 1884, the “Inner Circle” line served over 800 trains a day.

The Underground is special because it was the first of its kind—it marked the beginning of something new and paved the way for hundreds of metropolitan railway lines to come. And it was famous, even American author Mark Twain took the inaugural journey of the Central line in 1890. Passenger numbers grew rapidly into the 20th century, and by 1918 the Tube carried 70 percent more passengers than it had in 1914.

Although it would be replicated again and again across the world as underground railway travel caught on, in the late 19th century, it was the first time an underground line had ever been engineered for passengers. Like inventors before and to come, the engineers and planners behind the London Underground literally had to rethink the way things has always been done in the past.

What engineers accomplished to successfully open the Underground has been called nothing short of “incredible” and “one of the true wonders of the Western world.” The Underground was paved using “cut and cover” technology, a simple construction method for digging shallow tunnels where a trench is “excavated and roofed with an overhead support system.” In this method, the system is strong enough to carry the load of what is built above the tunnel. 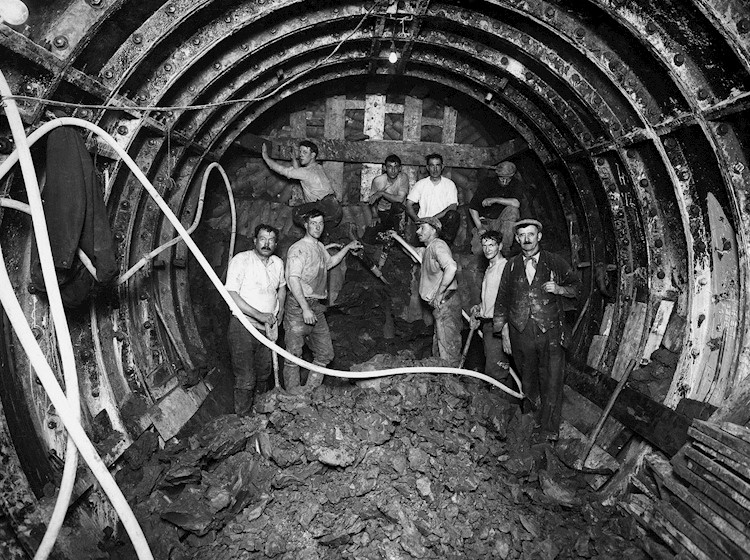 A series of “firsts”

The London Underground wasn’t special just for its tunnels, it also marked a few other “firsts” in the world of locomotive travel. London would also be the first city to have electric underground trains. Electric traction was introduced in 1905, and in as soon as 1907, most of the service was operated using “electrical multiple units” or trains that were self-propelled using electric power.

The Underground is also famous for its “iconic” map. Designed by Harry Beck and inspired by electrical circuit diagrams, it was first unveiled in 1933 and was the first of its kind. It was the first “schematic” map that focused more on abstract connections between points and less on geographical accuracy. In fact, it was originally considered to be “too radical” for the public.

The London Underground still operates in full swing today. The railway network, only 45 percent of which actually lies underground, now serves 4.8 million passengers a day and 1.34 billion annually. The Underground’s collective 11 lines comprise the 11th busiest metro system in the world. Each year, each Tube train travels over 100,000 miles, with plans to further modernize their technology in the next decade.

Would you take a ride on the Tube? You could go and experience some of the Underground’s most famous features like the “Mind the gap” recording that plays to passengers as they exit, originally recorded in 1968. You could also visit Platform 9 ¾, where characters from the literary series Harry Potter board the Hogwarts Express. Maybe you won’t make your way to Hogwarts, but you’re sure to find your own adventure while riding on the London Underground!

(Video) How they dug the Victoria Line: https://www.youtube.com/watch?v=GwRRSJ_wtIg

History of the Tube (in pictures): http://www.telegraph.co.uk/travel/destinations/europe/united-kingdom/england/london/galleries/The-history-of-the-Tube-in-pictures-150-years-of-London-Underground/

How the Tube was built (in pictures): http://www.standard.co.uk/news/london/how-the-tube-was-built-using-picks-ponies-shovels-and-a-lot-of-elbow-grease-8759404.html