The Institute for Transportation at Iowa State University had its modest beginnings in 1983, with a Federal Highway Administration grant to provide training and technical assistance to the state’s city and county road agencies. In 1988, that initial program—Iowa’s Local Technical Assistance Program—was joined by one of the first-ever U.S. DOT-funded University Transportation Center regional programs. This addition greatly expanded Iowa State’s focus on, and the national impact of, programmatic transportation-based research and education.

Through the years, several additional funded centers and programs have joined a synergistic collection of regional and national initiatives that are housed and administered under the banner of InTrans. From that initial LTAP budget of $100,000, the total InTrans annual budget has grown to exceed $19 million. Together these programs provide nationally renowned research, outreach, and training programs that every day make a difference in areas as diverse as transportation infrastructure, traffic safety, and mobility.

The institute’s name has changed a handful of times since 1983 to reflect changes in the organization. In 2009, its status changed from a university center (Center for Transportation Research and Education, or CTRE) to an institute and was reflected in its new name: Institute for Transportation.

View the expanded historical timeline below.

Iowa State University is selected to manage one of only 10 statewide pilot programs in the country to provide transportation technology transfer and related services to small urban and rural areas.

Leadership of the UTC grant transitions from Ben Allen to Tom Maze.

The LTAP and UTC activities are merged under one organizational structure, the Iowa Transportation Center (ITC), with Maze as director. A strong partnership with the Iowa Department of Transportation (DOT) continues to grow, and the ITC’s overall research, education, and outreach programs flourish.

The ITC has matured into a nationally recognized, multimillion-dollar-a-year program.

The center’s name is changed to the Center for Transportation Research and Education (CTRE).

CTRE signs a multiyear agreement with the Iowa DOT to regularize the department’s financial support of CTRE’s programs and to streamline contracting arrangements.

The Center for Portland Cement Concrete Pavement Technology is created.

CTRE, with the help of the Iowa DOT and industry sources, purchases and equips two mobile research laboratories that travel the country performing research related to concrete paving and geotechnical materials.

The Center for Weather Impacts on Mobility and Safety is created.

CTRE undergoes a status change from a university center to an ISU institute and receives a new name: Institute for Transportation (InTrans).

CTRE remains a center within InTrans.

InTrans’s geotechnical program becomes the Center for Earthworks Engineering Research (CEER) to reflect its expanded global partnerships and activities and sponsorship of a new, one-of-a-kind graduate degree program in geo-construction.

InTrans is awarded federal UTC funding totaling $2.52 million per year over the next two years to establish and lead the Midwest Transportation Center.

Shauna Hallmark is named as InTrans director in February.

The doors opened on the new Traffic Operations Laboratory, a teaching and research lab that houses state-of-the-art technologies and provides real-time operations data.

Partnership between the Bridge Engineering Center and the Iowa DOT Office of Bridges and Structures begins developing a bridge structural health monitoring (SHM) system that will allow for easier assessment of bridge conditions.

The first Innovations in Transportation Conference is held.

InTrans held more than 100 events with state and local agencies that had more than 3,600 participants.

InTrans marks 30 years since its establishment with a public reception on December 11. 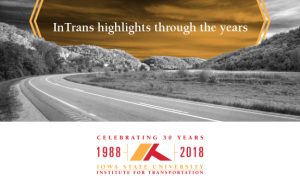