3D printing: What can it hurt?

This month’s series is dedicated to 3D printing. From its conception, 3D printing has been identified as one of the most important advances of our time. In this article, I will be discussing some of the negative impacts of 3D printers now and into the future.

In our last article, “3D printing: How can it benefit you?,” we unveiled that the possibilities of 3D printing are endless and wonderful—affordable everyday products, more efficient bridge models, and the potential for “printable,” functional organs. And we can’t forget about the effects of this technology on the world at large: lessened greenhouse gas emissions and the promotion of start-up or “home-based” businesses.

Many of the designs that are free to download via the World Wide Web, such as replicas of Star Wars characters (like Yoda), are actually protected by copyright. But now the question becomes, “How do you enforce copyright laws when people have these printers in their own homes?”

Well, some say a lesson can be learned from the music industry. When technology allowed for music to be easily shared without purchase, companies like Apple stepped in and made an industry out of the initial problem. iTunes made it possible for customers to purchase music on the internet in an easy, affordable way. Some say that this model should be replicated for 3D printing, where designs online can be purchased for a small price and downloaded.

Remember, we did say that the possibilities were “endless.” When you start to think of all the products that could be potentially printed, the list could include some dangerous products that are normally regulated for safety, such as guns. This is a very serious concern for many, given that one 3D gun design (the Liberator) was released in 2013 by the open source firm Defense Distributed and was downloaded over 100,000 times before removed by the US Department of State days later. 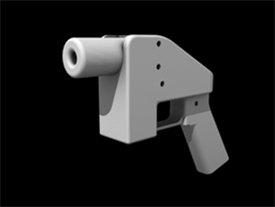 Additionally, products that were once tested for safety, such as bicycle helmets, can now be printed and used without testing. Besides the risk to the user, this could lead to liability issues if the user gets hurt because the helmet was faulty.

With the possibility of creating “printable,” functional organs for human use, there comes a series of ethical concerns. 3D bioprinting (i.e., printing human and animal tissue) has always been a contentious topic. The technology is still far off, but it could cause a lot of uproar from people that find the process unsafe or unethical.

Some of the questions that are surrounding the debate include: “Who will control the ability to produce organs?” and “Who will ensure the quality of those organs suited for transplant?” Since these questions literally deal with life or death situations, it is believed that 3D organs for transplanting could take a decade or more to get through testing by the US Food and Drug Administration (FDA).

Changes in the transportation sector?

We now know about the potentials (both good and bad) of 3D printing, but let’s face it, it is still a long way off before it can compete with traditional manufacturing.

The transportation sector, like many other sectors, require the fast production of many of its products. However, 3D printers still have the edge when it comes to customized products, including products that would regularly have several components. For instance, General Electric decided to 3D print their jet fuel nozzles; instead of the 18 separate parts once made from all different materials, their 3D printer makes them with a single metal and does so on demand.

3D printers are predicted to disrupt the flow of product supply chains that have a high percentage of their costs come from transportation and are otherwise suitable for printing. A few products likely to be printed include footwear, toys, electronics, auto parts, and plastics. This will likely affect the transportation industry, including “41 percent of the air cargo business and 37 percent of the ocean container business… [and] roughly a quarter of the trucking freight business.” If this happens as predicted, it would change the transportation job landscape drastically and could potentially result in loss of employment.

However, if 3D printing does take hold, there is a potential for the transportation industry to adapt and instead of transporting final products, they could carry more raw products used by 3D printers. Additionally, products like food and pharmaceuticals are not well suited for printing in the near future, so we can still expect transportation companies to play a large part in getting other vital, everyday products to consumers.