Let’s go: One day in Istanbul

After spending a day in New York City and Rome, it’s time to head further East, to spend a day in one of the most interesting cities in the world.

Istanbul, historically known as Byzantium and Constantinople, is one of the most significant cities in the world’s history. Istanbul served as a royal capital for almost 16 centuries, spreading over the years 330 C.E. to 1922 C.E., during the Roman, Latin, Byzantine, and Ottoman empires.

Istanbul is home to the remnants of Greek and Roman palaces, Byzantine cathedrals, and Ottoman architecture. Traces of old empires are said to be the foundation of the city’s charisma. Composed of 39 districts, Istanbul is like a mosaic crafted from marks of past cultures and civilizations.

The Bosphorus Strait (highlighted in red below) runs through the heart of Istanbul, connecting the Black Sea in the north to the Sea of Marmara in the south. Istanbul is also the only city in the world which straddles two different continents: Europe and Asia. 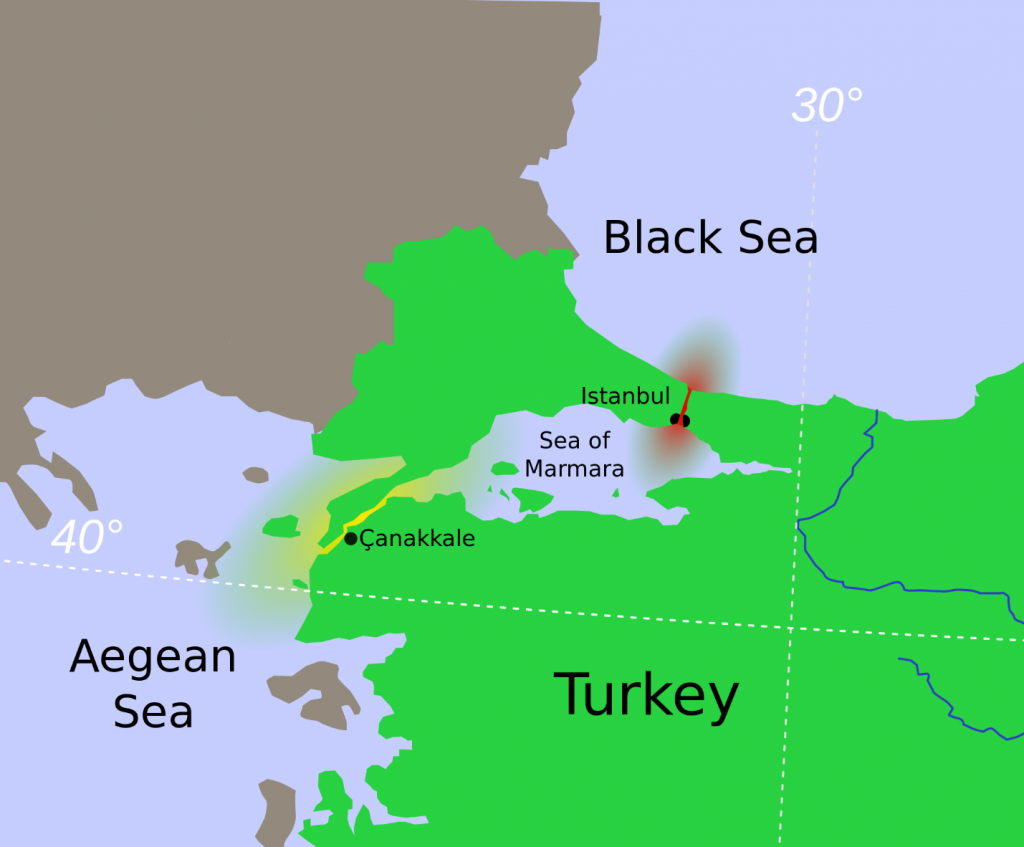 The tram, the Metro, the funicular, and the ferry

The public transportation system is often the best choice when commuting in Istanbul. Its efficiency is unparalleled, not to mention it’s going to be our cheapest option.

Between the tram, Metro, and funicular lines, it’s tough to compete with the accessibility of public transportation in Istanbul.

A tram is a rail vehicle that travels along tracks on urban city streets. “Tram” or “tramcar” is just a European term for what is called a “trolley” or “streetcar” in North America.

Today, most tramcars are powered using electricity. A “pantograph” (the apparatus mounted on the roof of a tramcar) generates power from its contact with an overhead wire that runs parallel to the tracks.

Istanbul’s tram system began with horse-drawn trams, dating back to the 19th century during the Ottoman Empire. They were replaced by an electric tram system in the 1920s, which stayed in service through the mid-1960s.

A system of modern tramlines was re-established beginning in the 1990s to solve the city’s congestion problem and still serves the city today.

Istanbul has two modern tram lines (T1 and T4), and they’re both located in Europe.

Istanbul also has two heritage tram lines; one is on the European side (T2), and the other on the Asian side (T3). Heritage trams are an effort to preserve rail traffic heritage, by showcasing historic aspects of streetcar or “trolley” systems.

The tram comes every 10 to 15 minutes from 6 a.m. until midnight each day.

The Metro is a rapid transit network in Istanbul. Think of the Metro like a subway or “underground” system.

The Metro is another form of electrically-powered railway, but unlike the tram, it operates on an exclusive right-of-way track that cannot be accessed by pedestrians or other vehicles.

Have you heard of a “funicular?”

A funicular is also known as an “inclined plane” or “cliff railway.” It involves tram-like vehicles moving up and down a steep slope; the ascending and descending vehicles are attached to a cable that moves them up and down. The vehicles counter-balance one another.

Istanbul’s Tunnel (Tünel), F2, consists of a single brick-lined tunnel with a station at either end. The Tünel first opened in 1875 and was the world’s second underground urban rail line, after the London Underground was built in 1863.

Funding the fare and Turkish lira

Istanbul’s currency is called Turkish lira, and we’ll need some of these coins to purchase our public transportation fare. Currency exchange offices and ATMs are located at the airport, so we can get some when we fly in. Here we can exchange our native currency for Turkish lira.

When riding public transportation, we can use one of three fare options: a transit pass, a paper fare card, or tokens.

An Istanbul Card (Istanbul Kart) is an electronic transit pass that can be loaded with credit and used to pay public transportation fare. Istanbul Cards are sold at “Istanbul Kart” vending machines.

The Metro and the tram both take Istanbul Cards, but take two different types of tokens (jetons). To make our journey a simple one, we’ll use Istanbul Cards. Istanbul Cards are valid for almost all forms of transportation in Istanbul, including the Metro, tram, funicular, and ferry.

What’s the best way to get from Rome, Italy, to Istanbul, Turkey?

European travelers highly recommend flying, because Italy is separated from Turkey by the Adriatic Sea to Italy’s east, and various countries including Albania, Macedonia, and Greece. Taking a railway would be highly expensive, not to mention it would take over 24 hours. Flying is our best bet.

Istanbul is packed with magnificent monuments and ancient architecture. We’re going to head to Sultanahmet, the center of historic Istanbul.

Sultanahmet is home to the Blue Mosque, named for the 20,000 blue tiles that decorate its interior walls. The Blue Mosque is said to be an iconic symbol of the city.

We could also visit the largest shopping mall in the world.

The Grand Bazaar, located in the district of Faith, is home to over 3,000 shops that sell authentic crafts. The Grand Bazaar is easy to get to from Sultanahmet; we could take a taxi.

Taxis are another relatively quick and inexpensive way to get around Istanbul, but after midnight taxi drivers charge double.

To make our way from Ataturk Airport to Sultanahmet, we need to get on the Metro first. The Metro won’t take us all the way to Sultanahmet, but we can use it to get a tram that will.

We’ll hop on Metro line M1 using our Istanbul Cards. M1 stretches all the way down to Yenikapi, but we only need to travel as far as Zeytinburnu. From Zeytinburnu, a tram can take us all the way to Sultanahmet.

Once we get off the Metro, at Zeytinburnu, we need to look for a tram labeled “Bağcılar—Kabataş.” This tramline, T1, primarily serves tourists, passing major tourist attractions throughout Istanbul. The route travels from the district of Bağcılar, through Sultanahmet, and then across the Golden Horn and along the southwestern Bosphorus shore.

Make sure to check the official Istanbul Railway Network map, under the “reference links” section below, for a visual picture of where we explored today, using M1 and T1!