Who Am I? Historical Iowan aviatrix

In 1915, I graduated from Ames High School in Ames, Iowa, and then attended Iowa State University where I studied mechanical drawing, combustion engines, and machine repair. But, what I really loved was flying.

I set out to become the first licensed woman pilot in Iowa. It took some time, but I finally got my pilots license. I flew every chance I got and loved it as much as I thought I would. Unfortunately, all civilian flights were grounded during World War I, so I took a job with the British Air Ministry in Elmira, New York. I inspected and tested aircraft parts and engines for battle. After the war, I could finally fly again. I bought an old Canadian plane (a Canuck) and had it sent home to Iowa. I rebuilt the wrecked plane in my parent’s backyard and started barnstorming and giving passenger tours for a living (even though I wasn’t technically licensed to fly with passengers). I loved flying and I loved Iowa, but with winter coming I knew I couldn’t have both. So, I decided to take a job at the Kinner Airfield in California.

What I loved most about my job was teaching other people to fly, especially other women. Flying changed them, and it changed me. Possibly the most important relationship of my life was my friendship with Amelia Earhart. On January 3, 1921, Amelia and her father Edwin walked into the airport and Amelia said, “I want to learn to fly. Can you teach me?”

Shortly after Amelia left, I met Bill Southern—the man who would become my future husband. After we were married in 1922, I decided to leave the airport to focus on my new family. A man offered me a house and a $500 Liberty bond for my old Canuck, if I would teach him to fly. So I did. And just like that my career in flight ended. Through it all, Amelia, the Earhart family, and I were close. After her disappearance in 1937, I knew I had to do something to honor her. I began touring and lecturing on my career in aviation and even wrote a book about my dear friend: I Taught Amelia to Fly.

In 1977, I flew one final time. It was a replica of Lucky Lindy’s Spirit of St. Louis. After I emerged from the plane, I looked up to the sky and remembered Amelia sitting next to me in the plane after a minor crash during her flight training. I remembered turning to make sure that she was okay and saw that she was calmly powdering her nose. The shock and sadness of Amelia’s loss and all the days that we waited, and continue to wait, still saddens me.

My name is Neta Snook, and I taught many people to fly. 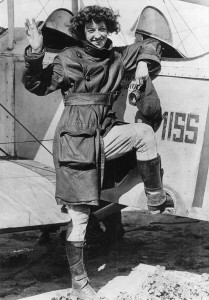